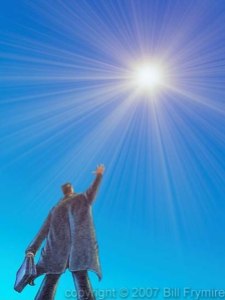 “If you reach for a star, you might not get one.  But you won’t come up with a hand full of mud either.”

I came across this quote many years ago and, looking back, it’s the way my life has unfolded.  Personally, I never got that star but things have been pretty damn good and the reaching was fun.  I’m still at it.

Here are some of the things I’ve learned along the way:

Spend less than you earn – invest the surplus – avoid debt

Do simply this and you’ll wind up rich.  Not just in money.

If your lifestyle matches or, god forbid exceeds, your income you are no more than a gilded slave.

As individuals we only have one obligation to society:  To make sure we, and our children, are not a burden to others.

The rest is your personal choice.  Make your own and make the world a far more interesting place.

While giving is a fine and pleasant thing, no one has an obligation to do so.  Anyone who tells you differently is trying to sell you something, most likely the idea of giving to them and/or their pet project.

You own the things you own and they in turn own you.

Money can buy many things, but nothing more valuable than your freedom.

You weren’t born to be a slave.

Carrying debt is as appealing as being covered with leeches, and has much the same effect.  The idea that many, indeed most, people seem to happily cover themselves with debt is so beyond my understanding it is hard to imagine how, let alone why, the downsides would need be explained.

Take out your sharpest knife and start scraping the little blood-suckers off.

Seek respect only from those you respect

Travel slowly, avoid the sights, linger in outdoor cafes, talk to the locals, leave your camera at home, do it now, do it while you’re young.

The problem with Beanie Babies, or anything else produced as a collectible, is that when people buy them they save them.  They will never be rare and rare equals value.

Fads, manias and bubbles:  What they all have in common is that by the time you start reading about them everywhere, the end is near.

It’s OK for the other guy to get a deal, too.

If you choose to try to best the averages, God Bless and God Speed. You may well be smarter and more talented than I. You are most certainly likely to be better looking. I’ll look for your name along with Warren and Peter’s in the not too distant future.  I extend the same to all those folks I’ve met in Vegas who assure me they have bested the house. I listen, gaze up at the billion dollar casinos and reflect on how many smarter, more talented and better looking people there are than me.

This whole civilization thing has been a huge mistake and we’d all be better off as hunter/gatherers.  But since we do live in this complex, technical world you had best learn about money.  Money is the single most important, effective tool in navigating it.

Lead with your bright and shining example and maybe I’ll follow. Berate me for not believing as you do and I’ll likely tell you to go fuck yourself.

Sound investing is not complicated.  Complicated investments make money only for those selling them.

Keep a mental list of people you’d like to have a cup of coffee with.  Invite them.

There is nothing you can’t learn, no place you can’t go, if you read.

Addendum 1: I couldn’t have said it better myself….

These are companies I have personally vetted and recommend.

YNAB and Tuft & Needle both support this site with paid ads. If you click on those ads it shows them the ads are working for them and that support will continue.

Personal Capital, Betterment and Republic Wireless are affiliate partners of this site. Should you click though to their site from this one and chose to do business with them, this blog will earn a small commission.

Vanguard is not an advertiser or affiliate but, Vanguard if you are listening, we’d love to have you!