You are here: Home / business / Muk Finds Success in Tahiti

Let’s run away together

One day, many years ago, I was having an especially bad day at work.  Late in the afternoon I called my not-yet-then-but-soon-to-be wife and said:

“I’m sick of this crap.  Let’s quit our jobs and run away to Tahiti.”  I’m not entirely sure I knew where Tahiti was at the time.

She said, “Sounds good.  I can get a deal on the airfare.”

Two weeks later a lovely Tahitian girl was hanging a welcoming lei around my neck and I was learning I’d need to be careful what I suggested around this woman I had proposed to marry.

Tahiti is actually a collection of islands in the South Pacific, each seemingly more stunning than the last.  On one of these we stayed for a while in a hut built over the crystal clear water.

One morning, lingering over coffee in the outdoor cafe on the grounds a trim, athletic fellow came up to our table.  He was barefoot and shirtless.  He introduced himself as Muk, one of the hotel owners.  An obvious American by his accent.

Exceedingly curious, of course we invited him to join us.  Muk is a great conversationalist and story teller.  He began by confessing he had noticed my not-yet-then wife lounging about the day before and had almost upbraided her for slacking in her duties.  She very much looks like a Tahitian. 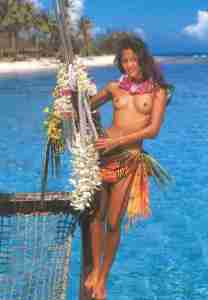 Beautiful Tahitian girl, but not my wife

All very amusing, but not answering my burning question.

“So,” I said, “how exactly does a guy from the USA wind up owning a hotel in Tahiti?”

Turns out Muk and two of his pals had graduated from university somewhere in Michigan in the early 1960s.  From there they moved to California.  Casting about for something to do, one of them noticed a small classified ad offering a pineapple plantation for sale in Tahiti.  Dirt cheap.  Remember, Tahiti had yet to become a famous tourist destination.

They bought it sight unseen and began packing their bags.

I said, “Did you know anything about pineapple growing?”

“But surely you worked on a farm while going to school?”

“Never even set foot on one.”

They get to Tahiti and go to work on their pineapple plantation.  Within a couple of months it becomes clear why it was dirt cheap.  Turns out you can’t actually make a living growing pineapples in Tahiti.  Broke and getting broker, stranded in paradise, they began to wonder about their options.  That’s when the local bank in Papeete invites them to a meeting.

Seems down the hill from the plantation, on the water, is a half-built hotel.  The builder has bellied up and given up.  Would Muk and his pals, the bank asks, be willing to finish it?  Generous terms, of course.

“Wait a second,” I said, “did you guys have any construction experience?”

“But you’d run a hotel before then, right?”

“Never.  But we had stayed in some occasionally.”

“So why in hell, and I mean this in the most pleasant possible way,” I said, “would a bank gift a half finished hotel and construction loans to you guys?”

“Their back was against the wall and we were Americans.  Americans had a reputation for getting things done.”

Muk and his pals lived up to that reputation.  Despite the lack of experience, they got the hotel finished and operating profitably.  Then they went on to build and operate others, including the one where we stayed.

By the time we met he was rich, barefoot, shirtless and getting richer.  Oh, and living in paradise to boot.

BTW, in writing this I got to wondering about Muk and Googled him.  Turns out he’s now 80 and going strong.  Some of his story details are different than I recall and have presented here, but clearly we weren’t the only ones upon whom he made an impression.

But Muk was not the only person in Tahiti we met who had managed to put life together on their own terms.

One evening we wandered down the beach to a little place on the sand for dinner. Out in the bay there were several beautiful sailboats.

While we were having drinks a dingy detached from one of the boats and made its way to shore.  A couple about our age got out, walked up the sand and took the table next to us. We got to talking. Soon we were sharing a table and having dinner together. Unfortunately, I have forgotten their names, but I’ll never forget their story.

They had sailed over from LA and were spending four months roaming the South Sea Islands.  What, I asked, did they do that allowed for such a thing?

Turns out this guy had two partners and the three of them owned two things together: That sailboat and a business in LA. On a rotating basis two would be in LA running the business while the third would be out playing with the boat.

Clearly you’d need partners you trusted implicitly, but with that in place this might be the sweetest deal I’ve come across.

Since starting this blog, I’ve come across several others focused on achieving financial independence and embracing life on one’s own terms.  Here are a few worth checking out:

These are all written by young people intent on breaking the shackles of debt and consumerism and living free.  They, and their readers, are filled with ideas and courage.

This freedom, to me, is the single most valuable thing money can buy and it’s why I recommend building your own stash of F-you Money:  http://jlcollinsnh.wordpress.com/2011/06/06/why-you-need-f-you-money/

Enjoy your journey, wherever it may lead.

« Travels with “Esperando un Camino”
Go ahead, make my day »