You are here: Home / business / YNAB: Best Place to Work Ever? 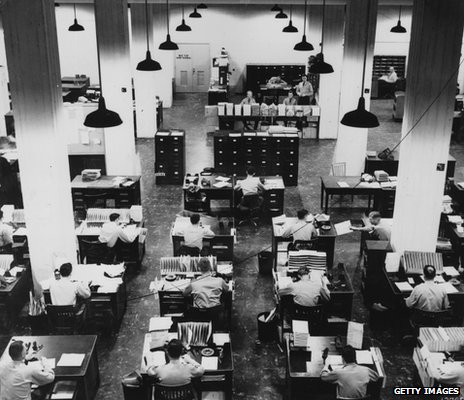 The second hand made its agonizingly deliberate sweep. All eyes were locked to it. Ever so slowly it erased first the seconds, and then the minutes, on the plodding march to 4:45.

The workers sat, bundled in their winter hats and coats, their belongings at their feet, with their heads raised to it as in silent, patient prayer to a powerful god.

Along about 4:35 they had begun to put away their work and prepare for departure. Years of daily practice had made them efficient. Most were done well before 4:40, leaving nothing to do but wait. There they’d sit, staring at the big clock that hung high on the bullpen wall.

When that second hand passed 12, marking precisely 4:45, it was as if a giant vacuum had been attached to the door and switched on. By 4:45:10 the place was empty.

I stayed till 4:50. I was widely viewed as the hardest working person there.

This was my first professional job out of college. It was with a small publishing company in Chicago that had been started in the 19th century. Its work rules were right out of the 19th century, too.

Most of the staff worked in a large open windowless bullpen. Offices lined the outside of this room, and those got the windows. As the advertising manager for one of the two magazines we published, I was fortunate enough to have one of those offices, which I shared with one of the two people who reported to me.

Work started at precisely 8am. We were allowed a 20 minute break in the morning and another in the afternoon. My pal Dennis worked in the shipping department. Each morning around 10, we’d take the elevator down and walk across the street to the local cafe for coffee and sweet rolls.

That elevator was manned by an elevator operator. He’d manually open and close the elevator doors and then sit on a little stool while he pressed the buttons to go up or down. He’d had the job for decades. Same building. Same elevator. Up and down.

My boss, Carl, was an older gentleman, president of the company and a very nice man. Sometimes he would join us on break. It didn’t take long to figure out that if we talked about anything we wanted for the first 15 minutes and then got Carl talking about the “good old days” in the last five, well that 20 minute break could easily stretch into an hour or more.

When you leave and return with the president of the company, nobody says anything about your 20 minute break now being 60.

Quitting time was 4:45 in the afternoon. Come what may, you didn’t dare leave a moment before. With rules like that, clocks have god-like power.

No wonder having F-you money was an early goal.

Lest you think this was a only relic of the dark ages, here’s another more recent story. Again with a small publishing company dating back to the 19th century.

This was twenty years later, in 1995, and after being heavily recruited, I had accepted a job as publisher.

My first day one of my fellow publishers, Denise, invited me to lunch. We walked across the street to a local cafe at around noon. We had an great conversation filled with useful information that proved helpful in my efforts to hit the ground running. We returned around 2 pm.

Not 15 seconds later my new boss, the owner of the company, was in my office.

“I was at lunch with Denise.”

“Lunch here is only an hour.”

“Well once lunch was finished, we just continued our business conversation there.”

“But lunch here is only an hour.”

“It wasn’t just lunch, it was a business meeting. Does it really matter where we converse? There or here?”

Bear in mind this was a conversation he was having with a new executive level hire. With a matching salary. With full P&L responsibility for a key part of his business. One that, if I might brag a bit, would go on to make him a ton of money. (Did OK myself, too.)

I still shake my head in disbelief. At the attitude, and that I stayed.

I was reminded of all this a couple of weeks back when an email from my pal Jesse Mecham arrived. It was this help wanted ad for a Server Side Developer, what ever the hell that is.

Jesse runs a company he founded called You Need A Budget, or YNAB for short. I don’t know what a Server Side Developer is or does, but were I still in the job market I’d figure it out, become one and go to work for Jesse at YNAB. Assuming he’d have me. Which might be assuming a lot.

I first met Jesse when he showed up as an attendee at our inaugural Chautauqua. We were all very impressed with his story and how much fun he was to hang with. A few weeks later I saw him speak at FinCon. He barely finished his talk before I was asking him to be a presenter at Chautauqua 2014.

He did a fabulous job and brought along one of his key executives. This fellow had been living in Italy for the last three years. YNAB is based in Utah. Yeah, I was intrigued too.

Unfortunately, Jesse won’t be joining us for Chautauqua 2015.

He’ll miss watching clouds being born in the valley below our new venue:   El Encanto

He says he doesn’t have the time. He cites the demands of running the increasingly thriving YNAB. His wife. His five kids. His intense exercise program. (He is the FinCon annual pull-up champion three years running, after all)

Some people have no priorities…

But I guess, when you are running the best company in the world to work for, you only have so much time.

Well, if you look at that help wanted email I linked to above you’ll see that about half of it is about the job and the qualifications for it. The other half is about why you’d want to work for YNAB.

I don’t ever recall any company ever caring enough to spend any time explaining to me why I’d want to work for them.

Jesse does. Here’s what he says in that email:

A Bit About US

We build the best budgeting software around, called “You Need a Budget” or “YNAB” for busy people. For over a decade, people have been buying YNAB and then telling their friends what a difference it has made in their lives. (Google us, or read some of our reviews on the app store, and you’ll see what we mean.) We love building something that has a huge positive impact on people’s lives.

We’re profitable, bootstrapped, and growing. YNAB started in 2004 and we’re in it for the long haul. We haven’t taken any outside investor money, and we haven’t borrowed any money.

We have one overarching requirement when it comes to joining our team: our Cultural Manifesto has to resonate with you, you know, pretty deep down. If it strikes a chord with you, you’ll probably fit right in. We’re excited to hear from you.

First, let me sell you on the idea of working with us at YNAB. Then we’ll talk details on what we’re looking for.

How You’ll Work at YNAB

We work really hard to make working at YNAB an amazing experience. We have a team full of truly exceptional people—the kind you’d be excited to work with. Here’s how we operate:

Live Where You Want

We’re a distributed team, so you can live and work wherever you want. Proximity doesn’t influence productivity. As I write this, Taylor (our CTO) is in Italy. I’m not sure where he’ll be next. Not all of us travel so extensively, but the fact that he does is totally okay because we’re all adults. Just make sure you have a reliable internet connection.

We rarely work more than 40 hours per week. There may be a few times where things go a little crazy and people log some more time. Most make sure to take some extra time off so it all balances out. We’re in this for the long haul. Don’t go crazy on the hours.

We want you to take vacation. In fact, we have a minimum vacation policy of three weeks per year (plus two extra weeks for Christmas break). It’s important to get out and do something. Post pictures of your vacation in our internal chat room, creatively named #office_wall.

We get the whole team together every 12 months and have a great time. Best Western conference room, powerpoints for hours…and budget talk. Just kidding. Last year it was in Costa Rica. This year is a gigantic cabin in the mountains. We do really fun things, but the highlight always seems to be just hanging out together and having a blast.

If you are Stateside, we’ll set you up as a W2 employee. If you’re international, you’ll be set up as a contractor. Employee or contractor, it’s all the same to us. You’re part of the team. (We are spread all over the world: Australia, Switzerland, Pakistan, Scotland, Canada, and all over the United States.)

We have a Traditional and Roth 401k option. YNAB contributes three percent whether you choose to throw any money in there or not.

If this sounds like your ideal environment, read on because now I want to talk about you.

Then he goes on to describe the ideal candidate.

I’ll be honest, if I had a company I’m not sure I’d be bold enough to run it like Jesse runs his. Too much old school training hammered in to me. But that’s a shortcoming in me. I sure would work for one.

My guess is, Jesse has his pick of top talent. That’s worth thinking about if you own or run a business. Given the choice, is that talent going to you? Or to YNAB?

While most of us will never get to work for YNAB, at least now we have a standard by which to measure other employers.

What we all can do, however, is benefit from the YNAB budgeting software. After all, you can’t grow a great company like this without great products driving the business.

Personally, I don’t use YNAB. But that’s only because I created my own spreadsheets back in 1993 when that was the only option if you wanted such things. Unlike Jesse, I wasn’t smart enough to turn them into a business.

But he has, and by all accounts YNAB is the very best option out there. I sure wouldn’t bother to create my own today. I’d turn to the folks who’ve already done the heavy lifting:

If you like what you see and buy after clicking on that link, four things will happen:

If you already use YNAB, why not post a comment and let us know what you think? Thanks!

I was recently interviewed on:

Mike & Lauren YouTube: Why your house is a terrible investment. In the Q&A we also discuss asset allocation, bonds and even dating.

1500 Days: 10 Questions with jlcollinsnh This will be followed in March by three installments of an extensive interview. Answering all his wide-ranging questions was great fun for me. If you enjoy this one, stay tuned for those!