You are here: Home / Annual Louis Rukeyser Memorial Market Prediction Contest / How to be a stock market guru and get on MSNBC

Back in the day Louis Rukeyser hosted a PBS program called Wall Street Week each Friday evening.  It was an end of the week ritual watching it for me. 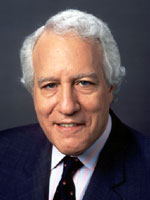 He’d open with a commentary on the follies and foibles of the previous market week and then turn to a rotating panel of three Wall Street gurus for their take.  Two of my favorites were Abby Joseph Cohen, a relentless Bull, and Marty Zweig, who was always relentlessly and deeply “worried about this market.”

Each guest was impeccably credentialled and Rukeyser made it a point to deftly schedule those who would each week present opposing views as to the market’s condition and direction.  Sometimes one would even prove right.

His commentaries, questions and comments were always delivered with a wink, a smile and with great good humor. Tragically, he passed away in 2006 and the current generation of investors is left without his insights and wisdom.

The key thing his program and its parade of guests taught me is that, at any given time, some expert is predicting any possible future that could conceivably happen.  Since all bases are covered, someone is bound to be right.  When they are, their good luck will be interpreted as wisdom and insight.  If their prediction happened to be dramatic enough, it could also lead to fame and fortune.

Every January Rukeyser would have each of his guests predict the market’s high, low and ending point for the year.  I forget his exact line, but after the predictions were in he’d say something like, “…with the understanding that even these experts could be wrong, there you have it.”  And he’d wink into the camera.

Since the Spring of 2009 we have been on a slow, grinding climb back from the brink.  Corporations have cut expenses to the bone and accumulated formidable amounts of cash.  Balance sheets are exceptionally clean.  I expect the pace of recovery to begin to accelerate and as the market senses that stock price will continue to build on the 13%+ increase they posted in 2012.  But most importantly, the news, gurus and commentators are filled all with gloom.

Now, don’t take any of this too seriously.  My crystal ball is just as cloudy as everybody else’s. I’m certainly not changing my investment allocation and strategy based on this and you shouldn’t either.  As Mr. Rukeyser would gleefully point out, even I can be wrong.  As I’d point out, I most often am.  We’ll see come next New Year’s Eve.

If you want to join me in this silliness, post your high, low and close predictions in the comments below and come year end we’ll, in the best Rukeyser fashion, honor those closest and jeer those most far off.

Even if I turn out to be spot on, it won’t get me interviewed on MSNBC.  Not dramatic enough.  But then, that’s not my ambition.  If it is yours, however, here’s how:

Step 1: Make a prediction for a huge short-term swing. Up or down doesn’t matter.  But down is easier and might get you more play if you’re right.
Step 2: Document the time and date you made it.
Step 3: When it doesn’t happen wait a bit.
Step 4: Repeat Steps 1-3 until one day you’re right.
Step 5: Issue Press Release: Market Plunges!!!, just as (insert your name here) recently predicted.
Step 6: Clear your schedule for media interviews.
Step 7: Send me my 15% agent’s fee of your new-found wealth.

Be sure not to issue your press release until events prove you right.

Oh, and keep in mind that once your Guru status is established you’ll be expected to be able to repeat it.  For months, maybe years, everything you say will be noted.  Each misstep will be gleefully documented until you slip from view humiliated and discredited.  But also rich if you’ve played your moment in the sun well.

Here are 14 Spectacularly wrong predictions that should serve to keep us all humble.

May this New Year bring you Health, Wealth and Happiness!

That’s both a Wish and a Prediction I truly hope I got right!

Per Smedley’s suggestion in his comment below, we now have a prize for winning the Rukeyser Memorial Market Prediction Contest 2013.  The chance to have a guest post right here telling us how and why you’re so smart!

Remember you need to predict the S&P: High, Low and Close for the year in you’re comment below.  Then somebody is going to have to remind me about this in December.  🙂

« See you next year….until then: The Origin of Life, Life on Other Worlds, Mechanical Graveyards, Great Art, Alternative Lifestyles and Finding Freedom
VITA, income taxes and the IRS »