You are here: Home / business / What Poker, Basketball and Mike Whitaker taught me about Luck

Consider all the people you’ve known for a moment.  Now focus on the five who have been least successful and the five who have achieved the most.  Ask yourself, what is their attitude regarding luck?  In my experience the contrast is striking.  What I notice is this:

If you play poker you know it is a game of skill.  No surer money making opportunity exists than having a player sit down at the table and announce that the winners will be chosen this night by the capriciousness of Lady Luck.  That happens, I can already feel their money in my pocket.  Talk about luck!

Will you cowboy up when you meet her?

But you also don’t play poker long, or with success, before learning some times the cards run with you and some times they run bad.  Ignoring these runs of luck is a dangerous and arrogant mistake.  Expensive, too.

I can remember one long poker night with Johnny,  and for all his formidable skill he couldn’t catch a break.  Every strong hand he pulled only won him the right to come in second.  A very costly proposition that.  Lord protect me from second best in a poker hand.

Around 3am he pulled a hand with 4 Fours. I’ve played a lot of stud and draw poker over the years and I can count the number of times I’ve seen four-of-a-kind on one hand.  It is as close to a sure thing as you can expect to get.

Several players were contending hard and the pot was huge.  When the dust settled one guy had a straight (and what the hell was he doing still in the hand?).  There was a flush and a full-house.  Each waiting to kneel before Johnny’s beautiful 4 Fours.

Then the last player rolled over his cards.  4 Queens.

Johnny tossed in his hand and turned to me.  “Ya know,” he said, “when you can’t win with four-of-a-kind it’s time to pack it up and go home.”  Better luck next time.

Since business entertaining was always a key part of my career, over the years I’ve found myself attending about half a dozen professional basketball games.  Inevitably we would be sitting in the best best seats in the house.  Equally inevitably I be sitting there wishing I could be home (to steal a wonderful phrase from Brave New Life) throwing rocks at trees.  Not my sport.

As my mind would wander boredom would morph into meditation and the same few thoughts would occur each game:

But the thought I dwell upon most is just how exceptionally lucky these guys are.

This is not to take anything away from their remarkable athletic talent, or the hard work it surely takes to play at this level.  Rather, how incredibly lucky these guys are to have this talent combined with those unique body types right now and in this place. 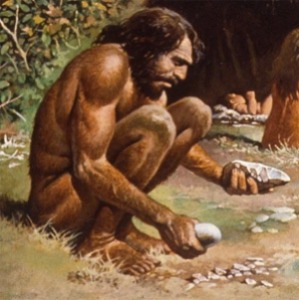 we’ve been looking for luck a long time

Until this moment in history and in this particular country, those same skills would have had zero economic value.  Had they been born at any other time in the last 200,000 years or so Homo Sapiens has been roaming the planet, nobody would have cared.  But today, in this golden moment, they are worshiped and showered in gold.  Not hard to see the luck in that.

This is not to pick on ball players.  The same is true for all of us if we have the humility to look for it.

One day in 1992 a venture capital pal of mine, Chris, gave me a call.  I had been searching for businesses to buy and he had an interest in backing me in the effort.  A guy in Kentucky needing cash to take his company to the next level had reached out to him.  Chris asked me to take a look, and that’s how I met Mike Whitaker.

Over the course of the next three months, working closely with his team, we developed a detailed business plan to guide them forward and secure the venture capital needed.  We got to know each other well and one night over dinner, at my request, he told me his story.

Mike was a South Illinois country boy growing up near the Kentucky border.  He loved his rural roots and home.

In the 1970s, as he came of age, the CB Radio craze began sweeping the country.  These things were the cell phones of their day.  Suddenly every motorist on the road was chattering away, CB in hand, irritating the hell out of truckers who’d been using this tool forever.

Mike found himself making a pretty good living selling the things until this fad, as fads will do, disappeared even more quickly than it had arrived.  Suddenly unemployed he had some thinking to do.  Living in South Illinois, he was not exactly surrounded by other options.

Bass Fishing, as it happens, is big business.  At the time that business was dominated by an organization called B.A.S.S out of Atlanta, Georgia.  B.A.S.S ran big-time bass fishing tournaments all across the country. But they couldn’t be bothered with little old South Illinois.

Mike figured if he could organize a few local bass fishing tournaments each year, he’d live what he loved and maybe make 10 or 15 thousand a year in the process.  More than enough to meet his modest needs.  He figured correctly as it turned out, and Operation Bass was born.

Over the next several years he ran his tournaments, generated about 150k in revenue and took home the 10-15k he needed.  He got pretty good at it.  He fished whenever he pleased.  Life was sweet.

The money in bass fishing tournaments comes from two sources.  Equipment and boat manufactures pay to be associated with the event.  Prizes and bragging rights are awarded.  Contestants pay to enter, hoping to win them.

Mike reveled in being Master of Ceremonies.  Who needed CB Radios anyway?

two guys showed up one day

One day two guys showed up at Mike’s door.  They were from the Pinkerton Tobacco Company. Among other tobacco products, Pinkerton owned the Redman Chewing Tobacco brand.  Guess what?  Bass fishermen are a key chewing tobacco demographic.  Pinkerton wanted a Bass Fishing Tournament.

Mike’s question was, of course, why would this national brand (and certainly a plum sponsor prospect) be interested in his little regional events?  Why didn’t they go to the national company, B.A.S.S?  Turns out they did.

But  B.A.S.S would only offer sponsorships in their existing tournaments.  Pinkerton wanted something more.  They wanted to sponsor a brand new national event.  They wanted it to be called The Redman Tournament Trail.   Would Operation Bass be interested in creating it?

“Yes,” said Mike, “we’d be interested.  But we simply don’t have the financial resources to do it.”

“We’ve already thought of that,” said the two Pinkerton Tobacco Company guys.  “You need to be bigger to do this for us. That’s why we are prepared to give you all this money.”  Then they figuratively pushed a huge bundle of cash across his desk.

“You take this, create the tournament and we’ll be your lead sponsor for as long as you are willing to run it.”

By the time I met him, Operation Bass was a multi-million dollar nationwide company.  The Redman Tournament Trail was a premier event in the Bass Fishing world.  He owned it lock, stock and barrel.  He was still doing what he loved and where he wanted to do it.  It had made him a wealthy man.

Mike did a lot of things right and deserves a lot of credit.  He analyzed his situation.  He followed his heart.  He looked for opportunity. He focused on what he knew. He set his goal.  He came up with a plan.  He created his tournaments.  He bootstrapped their growth.  He built a reputation.  He became precisely the one guy the Pinkerton Tobacco Company needed.  He delivered for them.  He earned it.

But what gave Mike his gracious aura was his unassuming humility and his cheerful recognition of the luck that had flowed his way.

even when we’re not looking it keeps on flowing

Working with guys like him, playing poker and watching basketball I’ve come to see luck as an ever present flowing stream.  Most of the time we are unaware of it, or maybe just not ready to reach in.  Our eyes are closed.  But sometimes we can be ready and sometimes our eyes are open.  Sometimes we recognize it and sometimes we know what to do with it.

It is said luck favors the prepared.  Seems it also is drawn to those who in failing, learn and keep trying.

It is seen by those who know when to step back to rest, reassess and look.

It is recognizable to those who pursue their dreams and what they love.

…give a little thanks.

Unfortunately for me, ultimately Mike decided that as much as he wanted to expand into TV and magazines per our plan, he wasn’t willing to give up the ownership equity my VC backers would have required.  Bad for me, probably best for him. We parted friends and lost track of each other as too often happens.

Google tells me he sold the business in 1996 and the new owners executed an expansion in 2001 that sounds very much like our plan.  I take some satisfaction in that.

You make your own luck

« How to Give like a Billionaire
The Casanova Kid, a Shit Knife, a Good Book, Having No Regrets, Dark Matter and a bit of Magic »