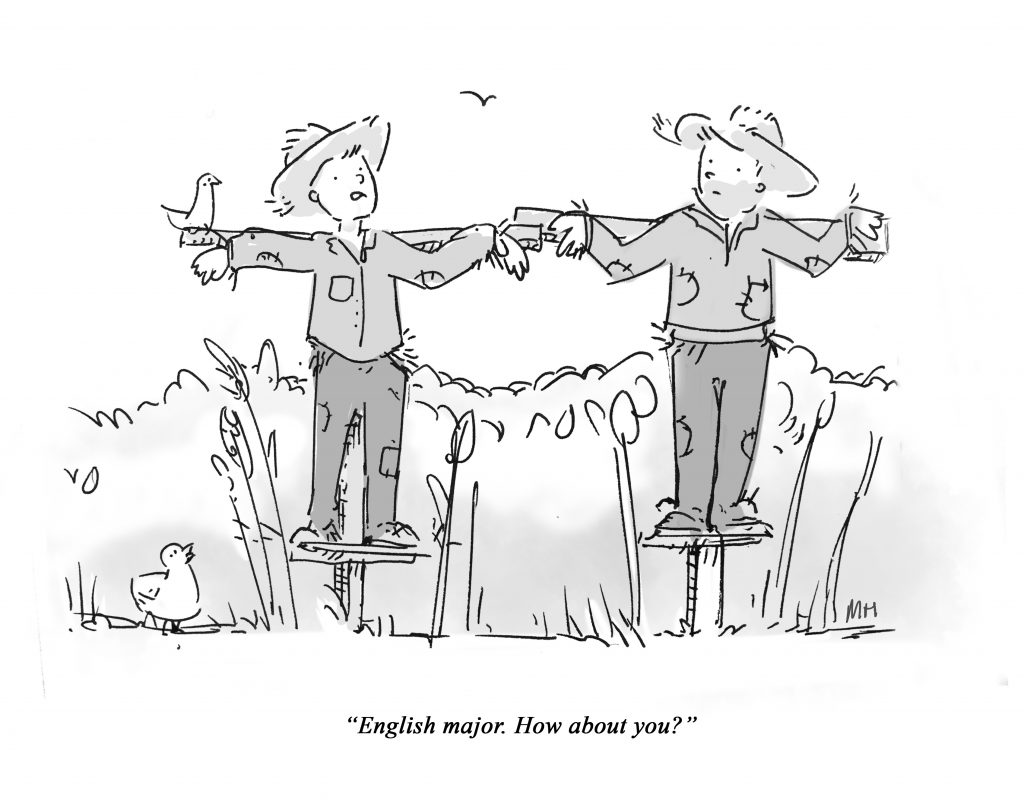 Ya gotta be optimistic if yer gonna be an English Major

Several years ago, as an English Major myself and because I can’t draw, I put a description of the cartoon above in my “About” page and in a post or two I can’t remember just now. In it I invited “one of my talented readers” to step up and illustrate it. Then I waited. And waited.

Finally, in early 2017, my patience and optimism were rewarded. Monica’s husband sent the above drawing to me and she agreed to let me reproduce it. Thanks, Monica!

Patience and optimism are also keys to investing success. Patience because it takes time for the power of compounding to unfold. Optimism because we have to trust the future will allow it the opportunity.

At some past Chautauquas, my talk has been called “The Tenets of jlcollinsnhism,” a title that rolls trippingly off the tongue.

The last of these tenets, because in many ways it is the foundation, is… 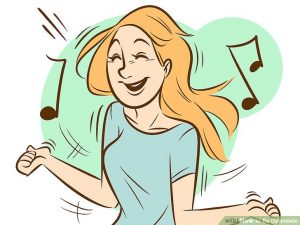 You Must be Optimistic.

For the investing approach I suggest here in my blog and in The Simple Path to Wealth to make sense for you, you must first have an optimistic view of the future of civilization in general and the United States in particular for the next 100 years or so.

Optimistic in the sense that the country will continue to be a major economic power on the world stage and stable politically.* Much as it has for the last 150 years or so. Note that this doesn’t mean or require that the next 100 years be a golden age of smooth sailing.

The last century was filled with trauma:  a couple of world wars, a great depression, stagflation, countless smaller wars and economic panics. Through it all, the market (as measured by the Dow Jones Industrial Average) rose from ~66 to ~11,500. I expect the next hundred to be equally traumatic and I expect, as before, long term investors in the US economy (thru a broad-based, low-cost index fund like VTSAX) will prosper.

In fact, the last century was so filled with turmoil, it is easy to imagine the next being better. Indeed, it already has been. By this time last century, we were already wrapping up the first of the two world wars.

If you share this optimism, then my approach is sound. For what it is worth, Jack Bogle and Warren Buffett both do. 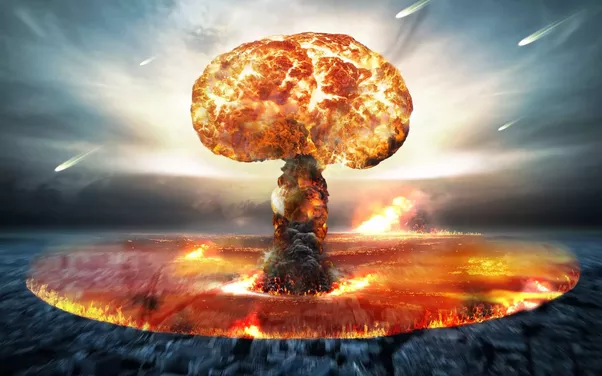 Of course not everyone does, and some see a far gloomier picture of civilization ending events.

Even for those folks I suggest my approach still works, along with stocking your shelter with guns, ammo, food and water. My approach in case you’re wrong, the other stuff not because it will actually help, but because what else can you do? 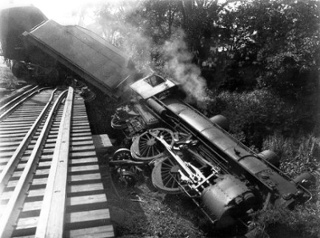 Between the Good and the Ugly lie those things that might derail the United States but leave civilization intact. Although, make no mistake. Any of these would have a devastating impact world wide.

—-If a major war were to be fought on US soil, destroying our economy and cities. Perhaps, as some fear, Trump does turns out to be the next Hitler and seizes dictatorial power and leads us into fascism and aggression such that the world bands together and overruns us leaving the US a smoking ruin. Just as it did with Nazi Germany and Imperial Japan.

—-Or maybe the divisiveness we see continues to grow, erupting into another civil war.

—Maybe we just slowly become a nation of slothful dependents and our creative work ethic spark goes out. This, BTW, is one of the reasons I am so very pro-immigration. New blood, new sparks.

—Maybe we just, and this is the one I fear most, suffocate ourselves under the massive debt we are accumulating. We are at 21 trillion and climbing and no politician even gives the problem lip service. It is hard to see how this ends well.

For what it is worth, I don’t think any of these things will happen and, while I’m not entirely sure how, I think we will muddle thru whatever does. But for those who don’t, you are faced with a dilemma: In what then do you invest?

Were some of these to happen, economies world wide would be trashed. Gold didn’t help the Jews or Germans under Hitler. It was just confiscated. As was their real estate before it was bombed to dust. The only thing that helped people survive these kinds of extreme events was extreme perseverance and flexibility. 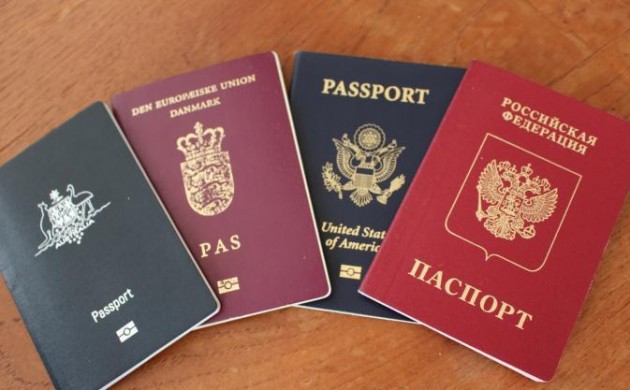 A second passport would be good, too.

So there you go.

In the unlikely event the pessimists are right, the options become very limited. Were I one, I’d still follow my Simple Path with most of my assets, playing the odds. With 20% or so I’d invest in whatever I thought would help in whatever calamity I thought most likely.

In recent years, the concept of Black Swans has become all the rage. But it is important to keep in mind that, by definition, you can’t predict what any given Black Swan will look like or when it will happen. So you can’t actually prepare an investment strategy to deal with one. What you can do, is focus on developing your flexibility. Become, as it is now called these days, Anti-fragile. As I’ve written many times before, this is the only true security.

“For myself I am an optimist — it does not seem to be much use being anything else.”

*Nothing lasts forever. From the Babylonians to the British, great empires have risen and faded. So too will the United States. This is something I discuss with my 26-year-old daughter. My guess is that the US will continue to dominate the world economy for at least the rest of my life, and very possibly hers. As long as that is true, I see no need for international funds.

But taking the very long view, at some point VTSAX might no longer be enough. If/when that time comes, I tell her (and tell her to tell her children) to continue to keep things as simple as possible. I’d look at VTWSX:  Total World Stock Index Fund (current expense ratio .19).  This fund invests all over the world, including ~50% in the USA.  With it you no longer even need to hold VTSAX.

**I realize in these examples I have touched on political subjects about which many people have very strong feelings. These are included not to express a political opinion, but only to serve as a few random examples of things that might possibly derail the US and my investment approach.

If you choose to comment on this post, and I hope you do, please do not make your comment political. This is not the place and I will be forced to delete it.

In case you start thinking about timing the market, here’s a chart from my pal Bill… 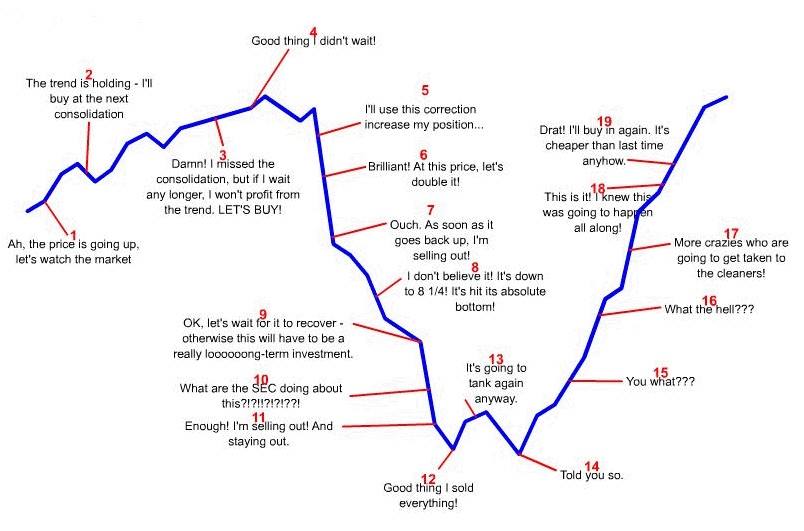 Time Machine and the future returns for stocks

And in case you start fixating only on what can go wrong in the future:

Interview with George Church on BioEngineering, an amazing discussion of human genomics, bringing back Wooly Mammoths (and why that would be great for the environment) and aging reversal (and why it is better than life extension).

More reasons why the future might be incredibly good

(Unless the grey goo gets us)

50 Ways the World is getting Better

Being FI doesn’t mean you have to quit your job. It means you have options. Just in case. On occasion I hear/read people saying “I don’t care about financial independence, I love my job.” Andy Rooney had a great quote:

“Don’t expect too much from the company you work for, even if it’s a good company.”

And from the always entertaining and insightful Go Curry Cracker:

Both weeks for Greece sold out have long been sold out. However, please feel free to put yourself on the:

Millennial Revolution — Chautauqua: Come Join the Family   (This is a brilliant post with all the details!)

1500 Days to Freedom — Meet some awesome people… (Another brilliant post, this one with dinosaurs!)

ChooseFI — Oh, the Places we will go   Chautauqua in the words of the speakers who will be in Greece. There is nothing quite like hearing the voices behind the words.

Also, be sure to listen to this incredible episode with Travis Shakespeare.  Travis is a master story teller and, among other things, he shares three:

Every now and again I get a comment on an old post. It is always nice to see those getting some attention and it is fun, for me anyway, to re-read them. Maybe you too. Here’s one:

Where in the World are You