Our venue for Chautauqua 2017 – United Kingdom

Some will surely claim, me being an old English Major and all, that it was inevitable. That a Chautauqua was destined at some point to find its way to Stratford-upon-Avon, the 16th century birthplace of William Shakespeare. You know, that guy who wrote some plays a few centuries back? The one I’m prone to quote when someone has poured too much ale down my gullet?

Once upon a time there was a country woman who made her way to the big city and while there took in a few Shakespeare plays. Back home, she was asked, “So what do you think?”

“Really? How so? Shakespeare is considered the best writer in the English language, after all.”

“That’s just what I don’t get,” said the country lass. “If you really think about it, all he’s done is string a bunch of famous quotes together.”

But, as thrilled as I am to bring a Chautauqua here… 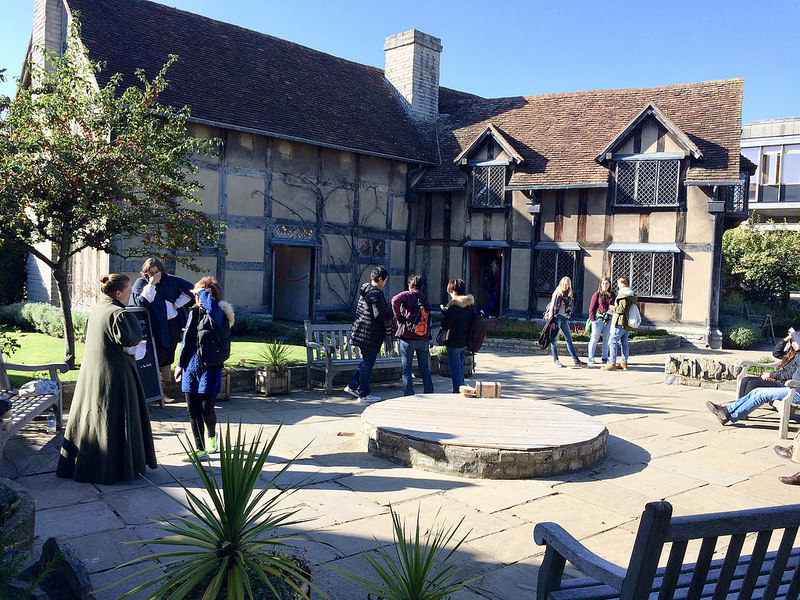 …my being an English Major has nothing to do with it. It is far more a bit of serendipity.

Last October, at Chautauqua Ecuador at Hacienda Cusin (there’s that 16th century again!) Katie and Alan, a very talented and interesting couple from England, showed up. Now in and of itself, this is not in the least remarkable. Chautauquas have a tendency to attract interesting and talented people. That is one of the reasons I love them so damn much: I get to hang out at cool places and meet cool people.

Anyway, it turns out that Alan runs something called Pop-Up Business School in the United Kingdom teaching budding entrepreneurs not only how to successfully get their ventures up off the ground, but how to do that without investment capital…

Well, it didn’t take long before we shanghaied him into giving a presentation on all this for our group, and it met with rave reviews. Turns out, not only does he have a cool story with a valuable message, he is a hell of a speaker. He put the rest of us speakers to shame in fact, something for which we are still trying to forgive him.

Mr. Money Mustache did, however, develop a rather fine and hilarious imitation of Alan’s style, which soothed our feelings a bit.  Too bad I don’t have a clip to share with you all. 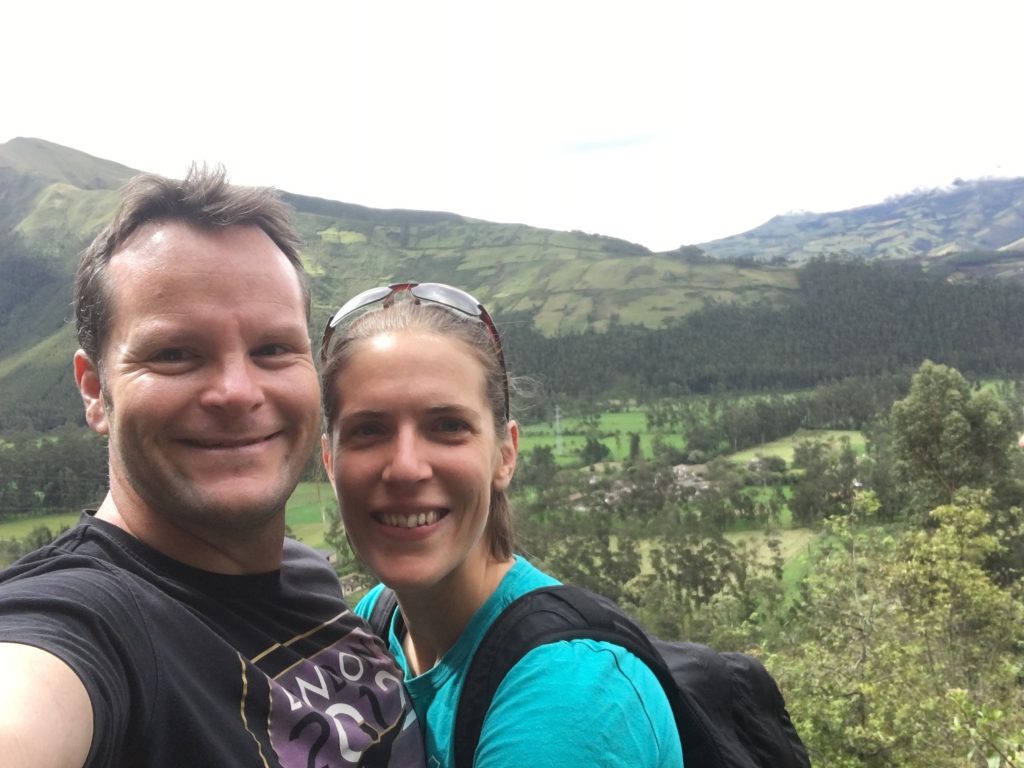 Alan and Katie, in the Andes

So, here I had this power couple who routinely put on events, had a powerful and inspirational message and who were based in England, where that Shakespeare guy was from. But nothing clicked in my little, and seemingly rapidly diminishing, brain.

But then, on our last full day, I noticed him scrambling about huddling with the other attendees. Didn’t think much about it at the time.

Turns out, that morning, Katie and Alan had a rather brilliant idea and by dinner they’d finished and presented it as a gift to us four speakers.

What they’d done was to track down each attendee, photograph them in situations and spots that exactly captured their personalities, and got them to say a few words about each of us speakers and what Chautauqua had meant to them. When they pulled it all together, we were gifted with this wonderful keepsake:

The second to last slide: 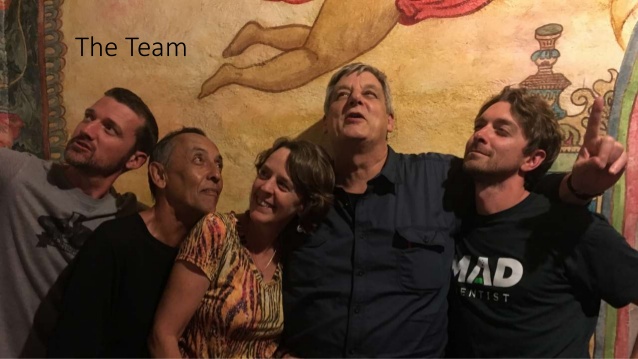 It brought tears to my eyes (especially looking at myself in that picture above). Walking thru it again just now, revisited all these wonderful people and their kind words, it still does.

That evening, going thru the slides yet again, the idea for this Chautauqua-UK finally clicked.

The next day, just before they left for their flight back to London, I pulled them aside and very briefly outlined the concept. They were excited out of the gate, but clearly had a lot to think about. Pulling together a Chautauqua is no small task.

We all returned home and, over the intervening few weeks, kicked it around, decided to go for it and sorted out all the details. And here they are:

On the website you’ll find all the details, including the full schedule, the scoop on your chance to have a private meeting with the speaker of your choice and stuff about us, your hosts and speakers.

If that’s not enough, it turns out all four of us speakers have been guests on the Mad Fientist’s podcast. You can give a listen to any and all here:

PopUp Business School – The Right Way to Start a Business

Including The Mad Fientist himself…

OK, time for some random pictures… 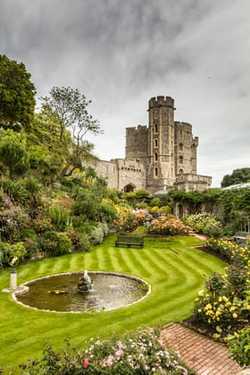 But don’t mind these guys… 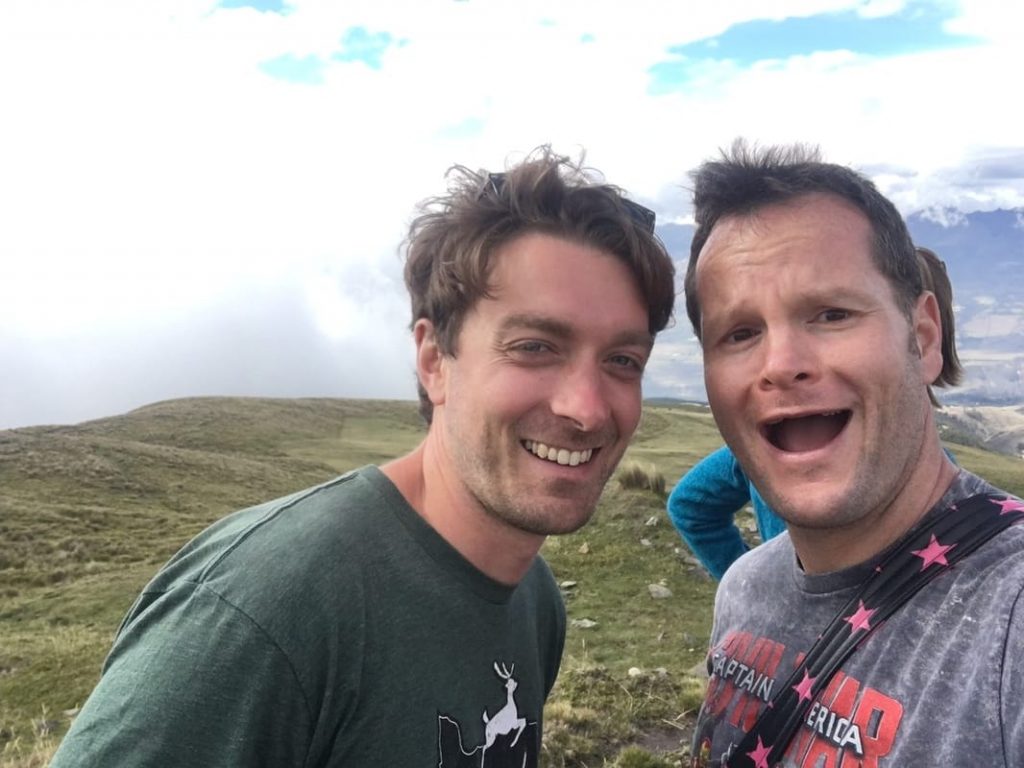 The Mad Fientist and Alan

Another shot of where we’ll be for the week…

So if this sounds like your cup of tea, and if you’d like to join us for High English Tea with scones and clotted cream (that’ll be on Wednesday!), not to mention all the other adventures this week of August 12-19, 2017 will hold, I urge you to sign up now:

As with previous Chautauquas, we are limiting the number of attendees to 25. This allows for a much more intimate experience and with more chance for personal interactions with us and with your fellow attendees. It is a big part of the magic, but it also means spots go quickly.

Travel hack your way there for little or no $$$$

My pal, and travel hacker guru, Brad Barrett has for the last couple of years helped our Ecuador attendees make their way to Quito for little or no money. He has graciouly offered to do the same getting the UK group to Heathrow.

His services, for these events, are free (and I also recommend you sign up for his free Travel Miles 101 email course)

If you’d like his help, you can reach him here:

Just tell him, you’re with us!

Wait! What about Ecuador?

No worries. If your heart is set on Ecuador, we’ll be there as always!

Posts announcing the Chautauqua 2017 — Ecuador will go up the week of January 15th. They’ll have all the details and registrations will open then. But let me give you a little preview:

October 7-14 will take us to a new, larger venue: Hacienda Chorlavi. Chorlavi will allow us to expand the number of speakers to five (Mr. Money Mustache, Paula Pant, The Mad Fientist, Cheryl Reed and myself) and the number of attendees to 35.

October 14-21 will take us back to one of our favorite places: El Encanto. In addition to Cheryl and myself, Kristy of Millennial Revolution (fresh from the UK event above) will be making her Ecuador debut and Jesse Mecham, CEO of YNAB (You Need a Budget) will be returning for his third Chautauqua and second as a speaker. Both these are major coups! Attendees will be limited to 25.

Be it England or Ecuador, I hope in 2017 we’ll get to hang out together!

Here’s Kristy’s take on it all:

She had me laughing out loud (and enough to make it worth spelling that out!) and reading parts of it to my wife on the shuttle from the airport to our rented condo here on Maui. The other passengers are surely staying up late tonight trying to figure out what THAT was all about. ????

The Mad Fientist’s take can be found here:

On an entirely different subject…

Recognizing that, as always, it will be a wild ride, I am an optimist about the future of the US and the world.  Despite all the hand-wringing on the daily news, objectively things are getting ever better. I look back over the turmoil of the past 70 years, and at the performance of the stock market in the teeth of all those challenges, and I feel pretty damn good.

Of course not everyone agrees, and scattered around in the comments here on the blog you can find folks taking me to task and predicting doom. Strikingly, other than some silly proposals that depend on market timing, they are long on panic and short on suggestions as to how to handle the potential disasters.

My pal Darrow, however, is one of the most clear-eyed and thoughtful guys I know and he just put up a cautionary post that is short on fear mongering and long on ideas. He opens with this sobering assessment:

“The baby boom generation has lived through a uniquely stable period in human history. Yes, we’ve seen regional wars, terrorism, and economic dislocation. But there hasn’t been wholesale destruction of a developed country, or its financial system, since halfway through the last century.”

His post is titled Alternative Investments for Savvy Retirees: Part 1 and in it he goes on to describe exactly that. His take on international investing is just about the only astute counterpoint to my own I’ve come across.

To be clear, I’m not changing any of my investment choices, but his is a perspective well worth reading. And, who knows, maybe once he comes out with Part 2…