You are here: Home / Stuff I recommend / Tuft & Needle: A better path to sleep 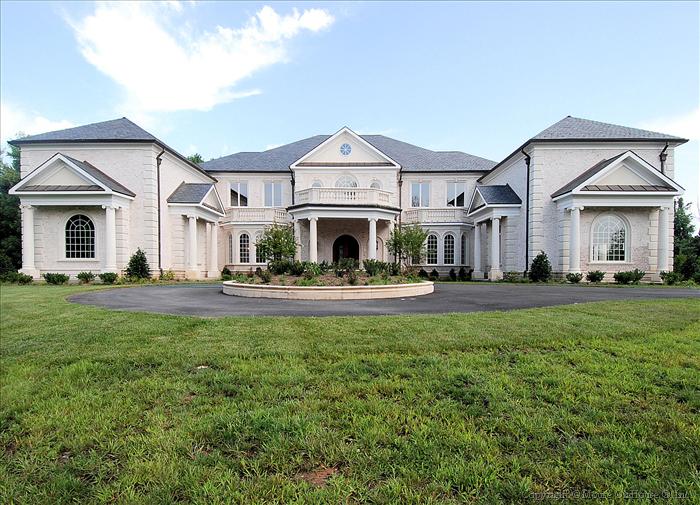 About a decade ago and roughly a mile from where I lived at the time there was a mansion on a hill. As I don’t much care about mansions I don’t recall many of the details. I do remember a huge pool in the center of the house with columns running along the sides and reaching up to the glass ceiling far above and the various courtyards that the sprawling building wrapped around. These I remember because they were where the party was held.

Hundreds of people attended this annual event. The man who owned the house invited all his friends, all his employes and, to avoid complaint, all the neighbors. That last was how we made the cut.

The fine liquors flowed and the food was wildly diverse. Both were relentlessly replenished and each courtyard held a different live band. Indeed, the best Blues I’ve ever heard was in one of those courtyards here in New Hampshire. And I grew up in Chicago.

It was the kind of party Gatsby would have thrown if Gatsby had had, you know, real money.

I got to know our host fairly well over the years. He made his money in many and various enterprises and unfortunately one of these involved buying and bulldozing the 150 acres of woods behind my house. This land had been logged by the earliest settlers who then tried to farm the rocky soil, building beautiful stone walls in their vain attempts to clear the fields. Eventually they gave up and the forest returned. When hiking it I was always trespassing, of course.

I enjoyed it mostly in late Fall, Winter and early Spring when the bugs were gone and the low, marshy spots were frozen. The dog and I would wander about, inspecting the old hunter’s blinds and the two shot-up derelict cars from the 1940s. It was hilly terrain and there was a lovely little pond tucked into a ravine. Chunks of granite stuck up out of the ground here and there and a couple of these made fine spots to sit, rest and enjoy a cigar. Only once did I ever see anyone else back there.

By the time his crews had finished, the hills were leveled, the pond drained, the derelict cars hauled off and not even the granite outcroppings remained. I couldn’t identify a single landmark I’d once known. In their place was a nice flat suburban subdivision with winding roads named after his daughters and million-dollar houses on the rise.

But his real money was made selling mattresses. He owned a chain of retail stores for that purpose. Because I knew him, I got to know just how incredibly profitable selling “discount” mattresses is. Because he tore down “my” forest, when I needed one I bought from his competitor. I still paid too much.

I paid too much partially because his competitor enjoyed the same handsome markups and partially because I bought a high quality mattress. This quality assessment I based on the fact that it was expensive and fancy.

I was willing to pay for expensive and fancy because I don’t sleep well. Most folks chalk this up to the likelihood that I have a bad conscience. Could be.

Unfortunately, the expensive and fancy new mattress did nothing for my conscience or my insomnia. In fact, we had it replaced three times.

Anyway, each time the inspector came to our home, took careful measurements, sent in his report and shortly thereafter we received a new mattress. Seems it would have been cheaper just to send out the replacements without the inspector but then, what do I know?

This was all very odd as presumably the inspector found the mattress defective and yet each replacement was exactly the same. Finally we gave up and just chose to live with it, looking forward to the time when we could justify replacing it. Hopefully with a better choice.

As it happens, earlier this year I was planning to do just that. Not a task I was looking forward to. Then, in the summer, I received an email from Daehee Park.

Operating this blog I get lots of emails trying to entice me into featuring some product or another so as to pawn it off you. It takes me about 3 seconds to hit the delete button. I was a breathe away from doing the same with Mr. Park’s.

But something made me pause. I read it more carefully and decided to respond. Among other things I said:

“So my first question is, do you really read my blog and has it really helped in launching your business? I’d ask that you take a moment to tell me how and what you like about it, just so I know this isn’t a spam email.”

I figured this would chase him away. But instead I got a reply that said in part:

“I originally came across your blog through a link/comment over at Mr. Money Mustache.

“Following your advice, especially the Stock Series, I got my personal savings plan in order while bootstrapping Tuft & Needle. I opened a Roth IRA for the first time and set up a 401k plan for the company. I took your portfolio advice and selected the recommended low-cost Vanguard funds (mainly VTSAX). It was tough getting it going while committing resources to a startup, but I’m glad I developed the ritual and habit early on.

“My favorite and most useful post, which I also refer our team members to is this one: https://jlcollinsnh.com/2011/06/08/how-i-failed-my-daughter-and-a-simple-path-to-wealth/“

Then, being the astute businessman he clearly is, he went on to tell me a bit more about his company:

“Back in 2012, my co-founder JT and I left the software technology industry in Silicon Valley and launched Tuft & Needle with $6,000 of our own savings. We’ve grown quite a bit since then. We’re now 15 team members and we did over $1MM in sales in the first quarter of 2014.

“…we are trying to a) cut out the middleman markups and b) put the customer experience first.”

It didn’t take long for me to start thinking of these guys as the Republic Wireless of the mattress space. That is, a way to buy a better mattress at a lower cost and not have to do business with the guy who ripped up “my” forest. Not that I’m one to hold a grudge.

So I began my due diligence. Anyone who reads this blog knows I value simplicity and here the T&N folks score big.

I also value, well, value. Depending on size, your T&N mattress will cost you between $250 and $750. That’s right. You can’t pay more than $750 even for their biggest, thickest king size mattress. Shipping is, as it always should be in my opinion, free.

It arrived, as promised, on the appointed day. When I got home I expected to find a large rectangle waiting to be unpacked. Instead it was a more compact, but still large, cylinder. That’s interesting, I thought.

This cylinder was tightly wrapped in plastic and as I carefully cut this away the mattress, which had been very tightly rolled and bound, began to inflate. “Inflate” is really the wrong word. It wasn’t actually being pumped up with air or anything. But that’s what it looked like. That, or some monster breaking free of it’s bonds.

Mmmm, I thought, this can’t be good; as much fun as it is to watch.

I don’t like air mattresses and I couldn’t get the whole inflate concept out of my head. But I shouldn’t have worried.

In short order it expanded (ah, that’s the better word) to it’s full size and has proved comfortably firm. And, importantly, when I move or my wife does, the movement isn’t transferred across to the other person.

I’ll let you go to their very cool website (click on the ad at the top of this page) for the details of how these mattresses are made and why they perform so well. But I will say one of the best things is that these guys aren’t just middle-men. They custom manufacture their products to their own specifications. 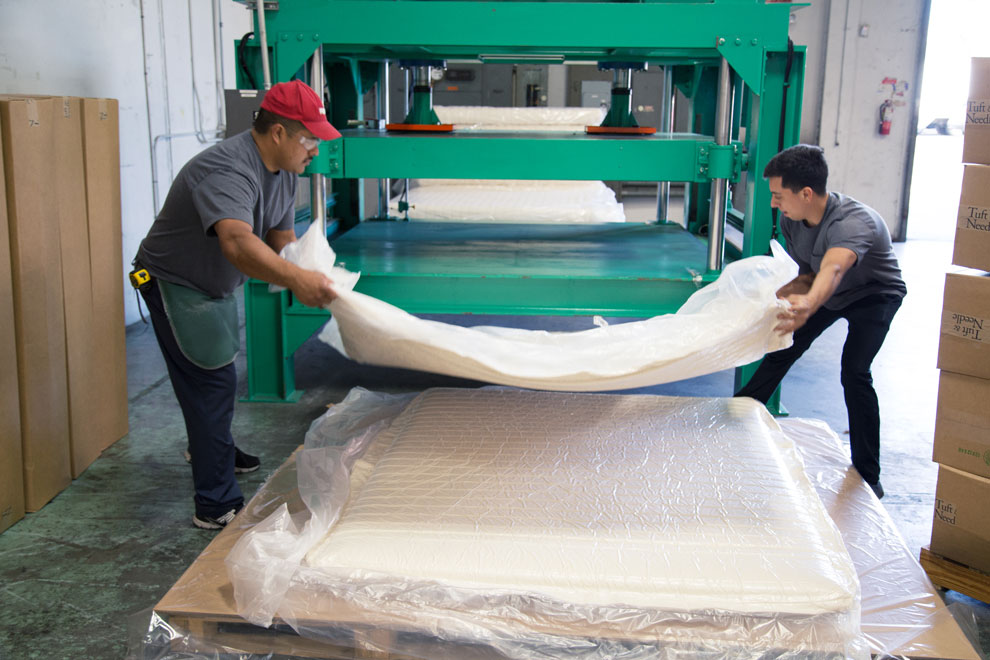 So, we’ve been sleeping on our T&N mattress for a couple of months now and we remain thoroughly impressed. I doubt we’ll need another for many years to come, but when we do this is where we’ll return.

…They offer a 30 day trial and a 7-year warranty. I can’t speak to either of those because there is no way I’m letting them have mine back. But I do like the attitude reflected in what they say about it:

“Contact us if you’d like to make a return so that we may begin our hassle-free process for a full refund.”

…They don’t pick up and dispose of your old mattress. This initially concerned me but at their suggestion we contacted The Salvation Army and the problem was solved easily enough and in a way that benefited somebody else.

…They don’t sell box springs. But we already had ours. Plus, if I were buying a bed frame again I’d get a platform style. It’s that whole simplicity ethic again. Box springs really are silly extra things.

So if you need a mattress, and I can’t imagine you’ve read this far if you don’t, this is the place I use.

That’s why Tuft & Needle is only the third company ever, along with Betterment and Republic Wireless, I’ve accepted as an affiliate. For me each is a big step and one I’m slow to take.

If you click on the ad at the top of this page, it will take you to that really cool website I mentioned earlier. There you’ll find lots more information and you can begin your own due diligence.

Then, if you decide to buy (and by way of full disclosure) this blog will earn a small commission. Your price is the same regardless.

Oh, in case you’re wondering, as nice as it is, my new T&N mattress has not cured my insomnia. But, I’m a whole lot more comfortable now staring thru the darkness at the ceiling.

As of November 1, 2016 T&N is a sponsor of this blog and their ad at the top of each page here takes you directly to their site.

It replaces those sometimes awful Adsense ads that used to rotate there. Yay!

As this is a company I truly believe in and whose product I actually sleep on, I endorse them without reservation. Hope you’ll check ’em out!

T&N has come out with a new mattress and a new frame. Here’s my review:

« Nightmare on Wall Street: Will the Blood Bath Continue?
Jack Bogle and the Presidential Medal of Freedom »