You are here: Home / Life / Dining with the Ghosts of Sarah Bernhardt and Alfons Mucha 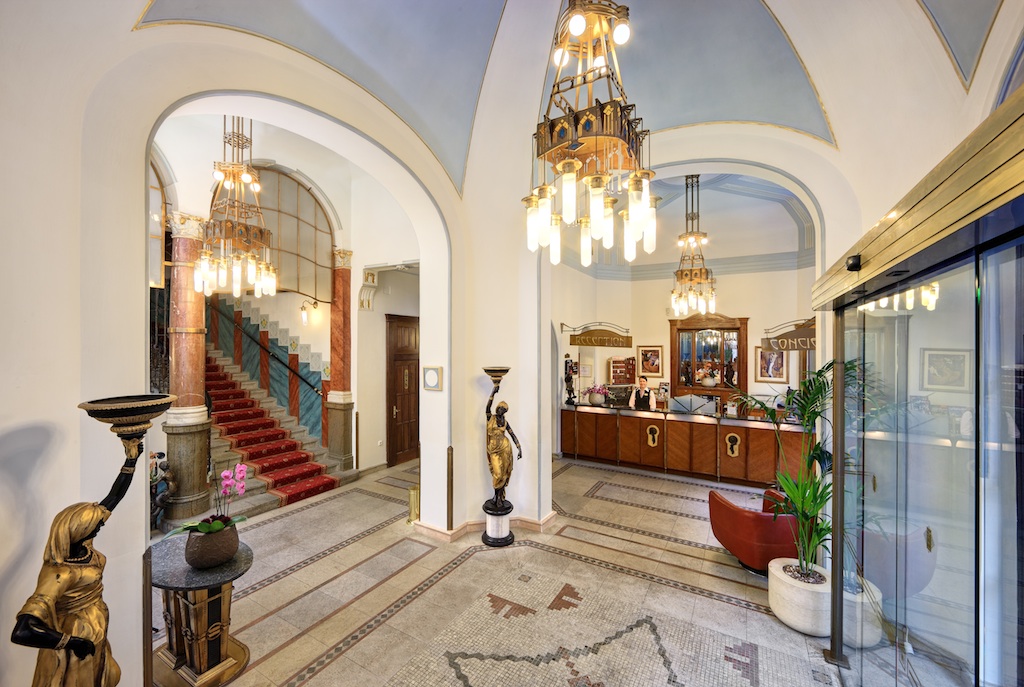 The lobby of Hotel Pariz, Prague

For the jlcollinsnh family, so far 2013 has been a very good year.

The house is finally sold, freeing up some capital. The stock market has been on a tear. Our daughter had her milestone 21st birthday April 1st.

Unfortunately, for that last, she’s in Rennes, France and we are in New Hampshire.

While we missed the actual day, later that month we did have the chance to meet up with her for a week in Prague. With all we have to celebrate, we decided to add a little luxury to this trip. The fact that we had only a week — usually we are stretching our travel dollars over a month or more — and because Prague is one of the least expensive cities in Europe, this seemed the time.

If, like we were, you are ever looking to splurge on a trip and you need a recommendation on places to do that in the great cities of Europe, my good friend, world traveler and fellow motor-biker, Barry, is your man.

Until he retired a few years back, Barry had a business bringing people from around the world to the great Universities of Europe during their off seasons. They’d come for a series of lectures given by the finest professors (who were of course also in their off-season) of the featured college, fine dining and luxury touring. A bit like a grander version of our own planned Chautauqua.

On his recommendation we stayed at the Hotel Pariz and a fine choice it was. This gorgeous old-world style hotel is in an elegant old building right in the old town center.

Adjoining the hotel is the Sarah Bernhardt Restaurant. This Sarah Bernhardt being the “Divine Sarah,” the French stage and early film star and “the most famous actress the world has ever known.” At least in the late 1800s and early 1900s when she was setting the world’s heart aflutter.

Her connection to Prague is the Czech artist Alfons Mucha who created many of the famous posters promoting her and the productions in which she stared.  Heres’ one:

Back here in the 21st century USA, a person’s 21st birthday is a bit of a milestone. Among other things, it marks the legal drinking age. That in mind, part of our plan for this trip was to take our daughter out to dinner for a belated birthday celebration featuring some fine dining and to maybe share our first legal bottle of wine together. So I was on the hunt for just the right place.

Like the hotel itself, the Sarah Bernhardt Restaurant is dripping in old world elegance. One look was enough to confirm the setting was just right. But that, of course,  is only part of the program.

Poking around the restaurant and its menu I noticed they offered a six-course Tasting Menu with wine pairings. I’m a sucker for good food and a believer in letting the chef serve what the chef thinks best.

And I’m a sucker for good wines but, short of red with meat/white with fish, lacking in the knowledge and skill for effective pairings. I’m more than willing to place this too in more capable hands.

In short, I’m a sucker for letting those who know better do it.

After considering some alternatives, one fine afternoon I stopped by and made a reservation for 8 pm the coming Friday evening. It was then I got the first hint this would be a special evening.

The maitre d’ didn’t just scribble our names in his little reservation book. Rather, he gave me a tour of the dining room suggesting which tables we might best like to be set for us. I chose one by the window.

Our dining room that night

While the Tasting Menu first caught my eye, faced with an intriguing selection of entrees and appetizers we are nothing if not thorough in our menu due diligence. But in the end, as I suspected it would, the tasting menu got the nod. If you’ve clicked on the link it is not hard to see why.

In addition to letting the chef choose what he considers his best, it also leads us to try things we might not ordinarily choose. Especially the wine pairings.

As I mentioned above, in this I claim no skill. But I know what I like. Still, like everyone, the range of what I like is limited to the range of my experience. And since the range of food and wine pairings is virtually unlimited it pays to have an open mind and palate. Let me offer two examples:

I don’t care for sweet wines and the Cypres de Climens 2007 served with our second course is as sweet a wine as I’ve ever encountered. My first sip gave me pause. Yet, paired with the duck foie gras as it was, nothing could have been more perfect. 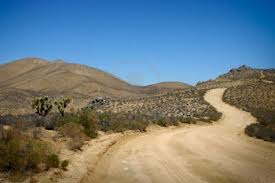 I do like dry white wine, but my first sip of the third course Riesling, late harvest 2010, Mikulov, Reisten Valtice made the Mohave Desert seem a tropical rainforest in comparison. Paired with the zander, it’s the obvious choice.

I know of at least three oenophiles who read this blog and I sincerely hope they’ll each weigh in with their thoughts on these and the other wines we enjoyed that evening.

Let me just add that the Chateau Camensac, Grand Cru Classe 1999, perfectly matched to our main course, was as good a wine as has ever passed my lips. And, thanks to a career that entailed rather extensive business entertaining and more than a few oenophile friends and skilled sommeliers, I’ve downed some pretty primo swill in my time.

That same career and its attendant expense account also has gotten me a seat in more than a few of the most highly rated restaurants of their day. I’ll say now, this meal easily ranks in the top five. In fact, the only reason I don’t place it firmly in the #1 spot is that I’m not sure my memory can still do justice to the other contenders.

My daughter has no such problem. Somewhere about three-quarters of the way thru, she sat back and said, “This is the best meal of my life.”

I said, “When you are 80 you very well might still be saying the same thing.”

But a beautiful setting, exquisite food and exceptional wines are only three of the pillars needed. Service is the fourth, and in many instances the one most likely to fall short.

But most often if there is going to be a weak link, the table service is it. It is here I have a couple of pet peeves. Well, OK, many more than a couple but I’ll only bore you with these few basics every server should know and every diner should expect:

If you are going to presume to open a premium restaurant and presume to charge premium prices, for pity’s sake take a moment to train your serving staff. And, yes, this includes the bus boys.

But not as good as I felt that evening watching our two master waiters ply their craft. Like any great art, Richard and Pavel were a joy to behold. So impressed was I, at one point I beckoned them over so they could hear me say to my daughter:

“For the rest of your life remember these guys. Tonight they have set the bar against which you can measure all future dining experiences.”

Yes, I was well into the wines when I presumed to do this. But I stand by the statement in the cold light of day and after a few weeks to consider it. They were that good.

As if this all were not enough, with the bill came complimentary tickets to: 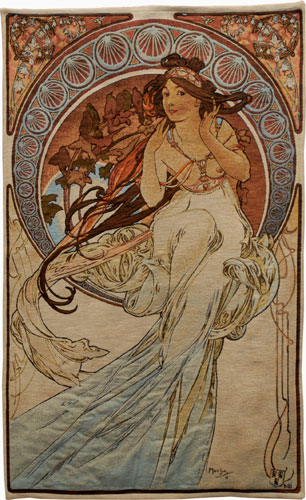 Just about this time last year, Mr. Money Mustache kindly invited me to present a guest post on his wildly popular site. In it I make the point that, for me, it has never been about “retirement.” It has been about having F-you Money and the freedom it brings. It is about having options.

Throughout this blog I urge you to save 50%+ of your income and to invest it in simple, low-cost index funds. Doing so buys you the most valuable thing money can access: Your financial freedom. But achieving this is just the beginning of a much richer life. As your money continues to grow along with it a whole new world of options and indulgences opens up.

In this interview The Mad Fientist explores with Paula a concept she express so well: The point of choosing to shepherd your money wisely is not deprivation. It is so you can, as her blog is so well titled, Afford Anything. Not everything maybe, but anything.

Being able to travel to Prague for a week to meet my daughter and to enjoy with her an exceptional meal with some exceptional wines is one of the indulgences that gives me great personal pleasure. In this post is another.

Your choices likely are different. Maybe you’ll share some in the comments?

Speaking of indulgences, this week I am visiting Cleveland and in the process checking off #7 in my plan for 2013.

Last night, in fact, was the much-anticipated dinner with The League of Extraordinary Gentlemen. With the exception of one 47-year-old naif, they are all geezers like me. Not a single one retired, but each with their own F-You Money. This they have accumulated mainly in the operating and sometimes sale of the various businesses they have launched.

My pal Dennis both hosts and organizes this evening of fine dining, excellent wines and wide-ranging conversation.  My thanks go out to him for it. We meet at a rustic fishing club tucked in countryside somewhere east of the city. Rumor has it that we are each hooded before being driven to this secret location. This is, of course, nonsense I can neither confirm nor deny.

Holding the event at this private club of his has two advantages for me:

So get yourself back out here, Dennis. My turn to buy. Same goes for you other guys!

« How we finally got the house sold
Stocks — Part XVIII: Investing in a raging bull »