You are here: Home / Life / Jack Bogle and the Presidential Medal of Freedom 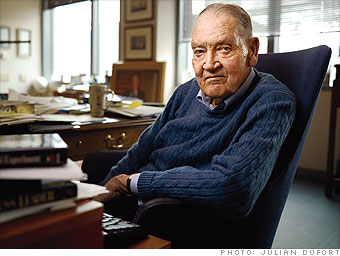 Jack Bogle on why he started Vanguard

Above is a picture of Jack Bogle, the founder of Vanguard, the creator of the modern low-cost index fund and my personal hero. If you aspire to be wealthy and financially independent, he should be yours as well.

Before Mr. Bogle the financial industry was set up almost exclusively to enrich those selling financial products at the expense of the customers. It mostly still is.

Then Mr. Bogle came along and exposed industry stock-picking and advice as worthless at best, harmful at worst and always an expensive drag on the growth of your wealth. Not surprisingly, Wall Street howled in protest and vilified him relentlessly.

Mr. Bogle responded by creating the first S&P 500 index fund. The wails and gnashing of teeth continued even as Bogle’s new fund went on to prove his theories in the real world:

The best performance over time is achieved by buying and holding all stocks in a low-cost index fund. Stock picking, and the actively managed funds that employ it, are fated to fall behind, dragged down even further by their higher fees. So rare is the active manager who can actually outperform over time, the few that do become famous house-hold names:  Buffett, Lynch, Price.

As the years rolled on and the evidence piled ever higher, Mr. Bogle’s critics began to soften their voices; mostly I’d guess because they had begun to sound pretty silly. Other fund companies, realizing that their customers were becoming ever less willing to accept high fees for questionable performance, even began to offer their own index funds in an effort to keep them from walking out the door. Personally I’ve never believed their hearts were in it, and for that reason my money stays at Vanguard.

Almost everyday now I get an email or a comment on this blog thanking me for the investing information I provide, especially in the Stock Series. I’m deeply honored by this and such messages are deeply motivating. But everything here has it’s roots in the work Mr. Bogle has done and it is he who has provided the essential tools we need to most efficiently and quickly reach financial independence. If I’ve provided a flickering candle to light the way, his work has been a white-hot sun.

So, if you are one of the many readers who have written to me in thanks, or if you haven’t but have felt you’ve found benefit here, I ask you to join me in making possible a honor that my personal hero and our collective financial saint, Mr. Bogle, truly deserves: 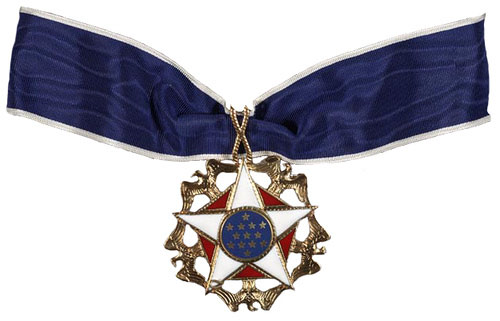 The Presidential Medal of Freedom

The fact that Mr. Bogle is being considered for this honor was recently brought to my attention by my pal Gouri, who I met and got to know at this year’s Chautauqua.* If you want to join in this effort, Gouri’s email to me below tells you how:

As you probably know, Boglehead leaders submitted a letter nominating Bogle for the Presidential Medal of Freedom, one of the highest civilian honors:

Given that Jack is 85, has had at least six heart attacks and one heart transplant, time is precious to have him receive the honor in his lifetime.

Please consider sending a personal card, letter, postcard or email via White House website, however simple or detailed, to President Obama to help nudge the cause forward:

Thank you, Gouri, for bringing this to my attention and thank you in advance to those of you who chose to help. I gather that the decision will be made in the next 30 days or so, so if you are going to do it, please do it now.

The truth is, my guess is that the unpretentious, clear-minded, straight shooting Jack Bogle doesn’t give a rat’s ass about receiving this award. If you click on the link below his photo above you’ll see the list of those he’s already received is extensive. But he deserves it nonetheless and his receiving it will send an important message to an industry that sorely needs to hear it and, perhaps, to those investors yet to see the light.

*Speaking of the Chautauqua, this seems a good place to share with you an advance notice that the next will be held February 7-14, 2015. I’ll be formally announcing it sometime later this month, but most of the details are already up on the Above the Clouds website. We plan for this one to be even smaller and more intimate than the last: 15 or 20 people.

We’ll have two new speakers and I’ll get to escape a bit of the NH winter. Depending on where you live, maybe you too!