You are here: Home / Life / Stuff I’ve failed at: the early years

“If you reach for a star you might not get one,

But you won’t come up with a handful of mud either.”

I was a miserable kid.  In every sense of the word.  The fact that the nuns kept referring to all the bad stuff being engraved into my “PERMENTANT RECORD” let me know I was doomed.  I failed every class.  Except PE one year when I got the lowest possible passing grade.

Fortunately no one cared so they kept passing me along.  It would be embarrassing to still be trying to get thru 2nd grade.

God knows what they would have diagnosed me with had they been doing that back in the day.  I’d be in a padded room somewhere.

I did have one major victory.  In the middle of fifth grade in the middle of the school day I gathered up all my belongings from inside the little desk with the flip-up wooden lid and went home.  My parents were not pleased.

I announced I was never going back.  I was, what, 9 or 10?  But I made it stick.  They put me in the local public school.  That wasn’t better but at least it took the kids a while to figure out they could pick on me.

I let kids pick on me.

I was always a big kid.  That should have been an advantage, but in a perverse way it wasn’t.  I was afraid to fight and once the other kids figured that out, well it was very ugly.  They could pick on this big kid, look tough and get away with it.  Very ugly.

When I switched schools in the middle of the fifth grade that gave me a fresh start.  By the time those kids figured out this big guy was actually an attractive target we were on to Junior High and another fresh start.

By then, I was learning to give off a different vibe and was mostly left alone.  I had made the big breakthrough to simply being friendless.  I was thrilled with the progress.

But then I went to a tough high school.  “Vibes” weren’t going to cut it. I was terrified.  I needed a plan.

I went out for the football team.  That helped.  I was big and stronger than I knew.

But a few weeks in, at the beginning of the last class of the day, History, Billy B grabbed me from behind.  He lifted me into the air.  He was a big kid.  On the football team.  One of the major school bullies.  He sensed weakness.

In a brief moment of clarity I knew what I did next would determine if I’d be left alone for the next four years or tormented relentlessly.  Every instinct was driven by fear and screaming at me to just give in.  But after eight years of torture I knew I’d rather die than endure four more.  How could poor Billy know?

I dropped my books and drove both my elbows into his ribcage as hard as I could.  He dropped me.  The bell rang.  He said:  “After school, you’re dead.”

I sat in the first seat of the row, Billy was two seats back.  In forty minutes I’d be beaten to death.  My insides were turning to jelly.  Half way thru the class Billy leaned forward and gently tapped my shoulder.

Instead I said, “OK, I’ll let it go this time.”  I may have been weak kneed but I wasn’t entirely stupid.

If I’ve prattled on here a bit, forgive me.  This was a defining moment.  My life turned on it.  I’ve thought about it deeply.  It wasn’t until years later it occurred to me what Billy must have been thinking.

His bully instincts had correctly sensed I was a victim.  Of course he was right.  But then, for reasons he couldn’t possibly understand (nor did I), for one brief shinning moment I would not be bullied.  I had no experience fighting and therefore no sense of proportion.  Looking back I likely broke his ribs.

So now he is in pain and has promised to fight this kid he doesn’t know and who is every bit as big as he.  It must have seemed a very dangerous mistake.

That one moment made my reputation and it carried me thru all four years.  I’d bested the school bully.  I must be a tough kid.  All in a single moment.

Wished I figured that out in first grade.

In 7th or 8th grade we had to take shop class.  Not sure if they still do this or not but it is where they taught, or in my case tried to teach, how to work with your hands.

For one project we had to build a wooden lamp and wire it.  I got mine cobbled together and took it home to my dad and begged him wire it for me.  He was good at that stuff.  I could have just as likely built the Space Shuttle.   Must skip a generation.

On the final day the shop teacher walked around evaluating and grading our projects.  Most of those kids had produced works of art.  He was lavish in his praise. When he got to mine he stared in disbelief. 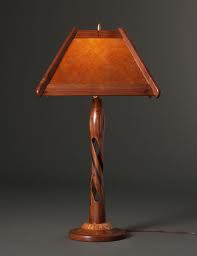 this is the kind of lamp the other kids made

I got fired from my very first job.

Besides selling flyswatters door-to-door and picking up pop bottles from the side of the road for the deposit, my very first job was in an ice cream store.  Homer hired me to scoop ice cream and serve customers.  Seems my scoops were too generous.  I like ice cream.

So he put me to work in the back scrubbing out the huge metal containers he made the ice cream in.  I got them all done, a task for Hercules.  Like cleaning out the stables.

When I left for two weeks to go to Mexico (see Languages below) he asked me to bring him back a sombrero.  I found one in the market.  Huge, awkward gaudy thing to travel with.  But I faithfully brought it back and gave it to him.  He thanked me.  Said it was perfect.

The day I turned 16 I went to the Jewel Food Store and applied for a job.  They paid $2.40 per hour but you had to be 16 to work there.  I was making $1.35 at the San Pedro Restaurant as a busboy/dishwasher.

Jewel started me as a bagger and, boy howdy, I was good!  Fast, polite; bread and eggs always on top.  After a few months they promoted me to Stock Clerk with a hefty raise to $2.70.

Boy howdy, was I bad.  S-L-O-W when the key to the job was getting those cans and boxes up on the shelves fast and looking good.  Never figured out why I couldn’t do this.  I was lighting fast as a bagger.  For whatever reason, I can’t stock shelves.  Well I can, but you have to be very patient.

In a rare case of insightful management and after a year or so of embarrassing myself, they transferred me to the produce section.  I was great at produce!  Nobody could unload the watermelon truck or trim the lettuce faster or better.

I admire multilingual people.  I always wanted to be one. Some of my best friends are.  My wife speaks English, Swahili and Kokonin.  My daughter speaks English and French.

I speak a little English, and I  failed French in college.  I still remember the beautiful girl who tutored me into a “D” so I could fulfill the language requirement and graduate. 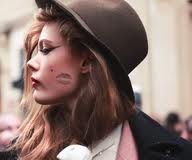 not my actual French tutor

“You really need to learn at least a little of this,” she said.

Mr. Thomson, who looked just like Clark Kent in the 1950s Superman serial and was married to a drop dead gorgeous Latina, taught freshman Spanish at St. George High School.  He even took a bunch of us delinquents to Mexico for a class trip.  Three days by bus from Chicago.  I loved it.  Loved him.  Loved the class.  Loved learning Spanish.  Lusted after his wife.

I couldn’t wait for sophomore year.  But I got Brother Bernard and that was the end of languages for me.  Out bled the joy and interest.  It’s all his fault.  Or maybe not.

Meanwhile, let this be a lesson, kids.  Don’t let anybody derail your ambitions.  Be like me and do it on your own.

« Snatching Victory from the Jaws of Defeat
Chainsaws, Elm Trees and paying for College »