Part I: This is island life.

I’m sitting under a couple of coconut palms, in a rattan chair, a view of the ocean in the distance. There are black and yellow butterflies on the red hibiscus flowers, and a lizard is watching me. In the tree beyond the terrace, I hear small yellow birds arguing noisily. I’m drinking a Carib beer and it’s barely 1 pm.

We’re in an Airbnb villa in the East End of Tortola for the next few days. A few hours ago, we got off of a 44’ catamaran which we shared for a week (a WEEK!) with 6 people we’d never met before:

Davide, from Milano, Mike, an Australian studying in Wisconsin, Yelena, from Croatia, now working in Phoenix, Karen and Mitch, both from the SF Bay area, and skipper Dean, originally from Dorset, England.

Everyone was roughly half our age. A good group, but we weren’t in charge of the sailing – Dean was, we just helped.

(The lizard is still staring at me. Not sure what it expects-)

We sailed from island to island, snorkeled often, went scuba diving, hiked up mountains, told stories over rum drinks in thatched restaurants, hoisted sails, picked up moorings, dropped anchor, and did most of the cooking ourselves on board.

We visited Trellis Bay, Beef Island, Norman Island, Peter Island, even stayed overnight off Marina Cay – many of the same names I remember from the trip in 1960.

The winds were strong at times, and we were glad someone else was in charge of the boat. But it gave us a good start on our sailing adventure – Stan steered, we all helped reef sails and ran around in dinghies.

I was amazed at how many other boats are in the marinas – it’s like a National Park on Memorial Day Weekend. Every popular marina is full.

But in bays where you have to anchor, or where there’s no bar, it’s pretty empty.

Out in the water, too, there is little traffic, but most people want a “good” spot for the best restaurants and bars. There is some serious partying going on out there, although our group was pretty relaxed and low-key.

By the end of the week, our clothes were salty and used, the trash was full and the water tanks empty, towels refused to dry anymore, we had bruises from bumping into boat parts as we hurtled along in high winds, and we managed to eat all the food and drink all the rum.

Everyone else has to head home to work today and back to “real life” – we get to stay.

Going back to the beginning:

The first 2-3 days, we stayed in St.Thomas. It’s hopping, and crowded and busy and up to 4 cruise ships dock on a day. Some of those cruise ships carry as many as 7500 passengers. (!) Yikes.

My favorite place was an old hotel on the beach called the “Island Beachcomber”, where Mom and Dad had regular rooms when Xanadu was built. An aging but graceful property. With good memories. Still, ready to leave and get sailing after 2-3 days.

Took the ferry over to Road Town, Tortola, more relaxed but still busy. Did I mention I found a scorpion in the bathroom sink?

The West End is more chic, our area is pretty local, goats and chickens running around, potholes and small roadside tire repair shops, no glitz. So we’ll spend a couple days here to catch up on emails, do laundry, recharge camera batteries and begin to actually study our sailing books. The week on the boat went so quickly! Amazing. 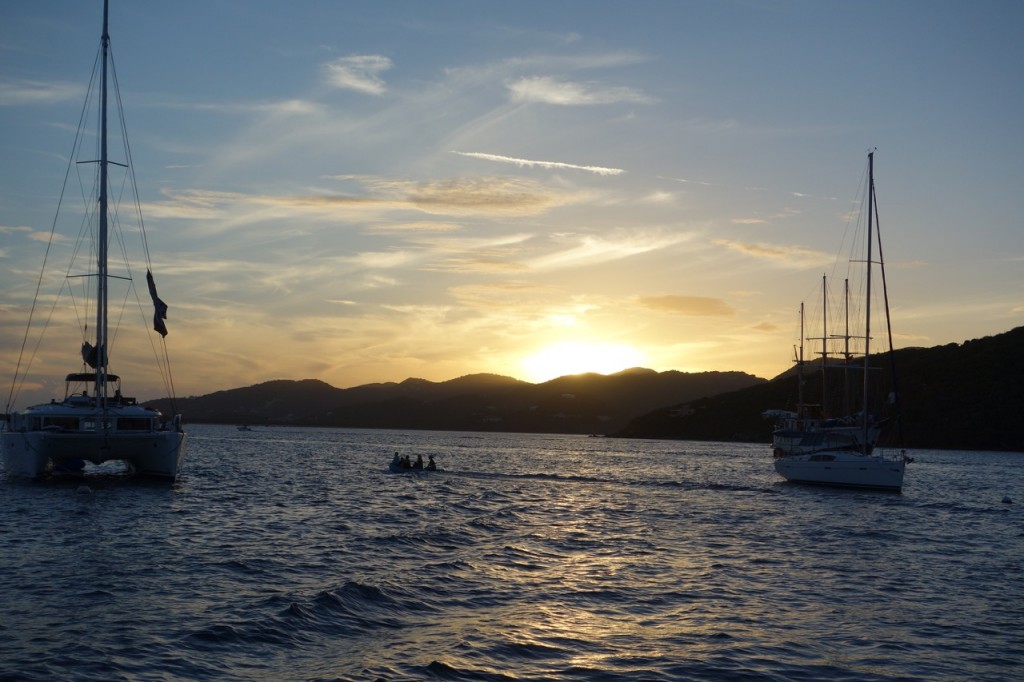 I think both of us were pretty nervous about the whole thing – and justifiably so.

It was physically demanding, out there on the “high seas”, winds 20-25 knots, waves, and us in a simple little 24’ boat, heeling like crazy, water nearly reaching the edge of the boat, no idea what we are supposed to be doing.

Our instructor was a young Swede named Tim, who usually races big professional carbon-fiber boats, so he was perfectly at home, while I was in a fair panic about holding the rudder, bouncing up and down and all around.

Stan and I hoisted the sails, climbing up on the cabin trunk, manned the sheets, the tiller, tacked and jibed and tacked again, each time scrambling from one side of the boat to the other, ducking under the boom, did 180’s and PIW (person in water) rescues – and we actually retrieved the fender (the fake man overboard) each time!

I didn’t think it could be done.

We rounded buoys, aimed for islands, and we would figure out how to get there, and what we needed to do. It was up to us to set the course and take the necessary actions.

We docked at the fuel dock, on sail only, left the pier backwards, sailed (without an engine) between the mega catamarans – without incident, navigated the harbor entrance coming and going several times, avoided several high-speed ferries and a tanker, and a number of motoring yachts. We even brought the sailboat back and moored it beside another one, coming up perfectly parallel before we tied ours to it.

We attached and raised the sails, took them down, and did all the necessary knots in the sails.

And now – we are physically and mentally beat. What a workout! I mean, even just climbing in and out of these boats takes some thinking for us.

I was a bit worried before we started – we both were. Were we up to this? There were NO small sailboats out between the islands, much less one with a 60 and 65 year old learning to sail.

Even this morning, we discussed it – we were both pretty apprehensive after Day 1. But, like with scuba diving, I knew Day 2 would be better. And it was. So last night, we were pretty beat.

We met the instructor on the 36’ boat this morning – to learn how to use the winches – I thought: Yikes! How can Stan and I EVER hope to control this massive piece of equipment? All by ourselves? And not kill ourselves and others in the process?

But the day went well, and we did a LOT.

Tim gave us a pretty thorough workout. Of course, he’s 28, fit, and he’s been sailing since he was 7. He has no idea how clueless we are. And how hard it is for us. He just stands up in the steeply heeling boat, at what seems to us to be a death-defying 45 degree angle, calmly talking, while we are desperately trying to hold onto something and not fall out of the boat. Wow.

I am rather proud of us. 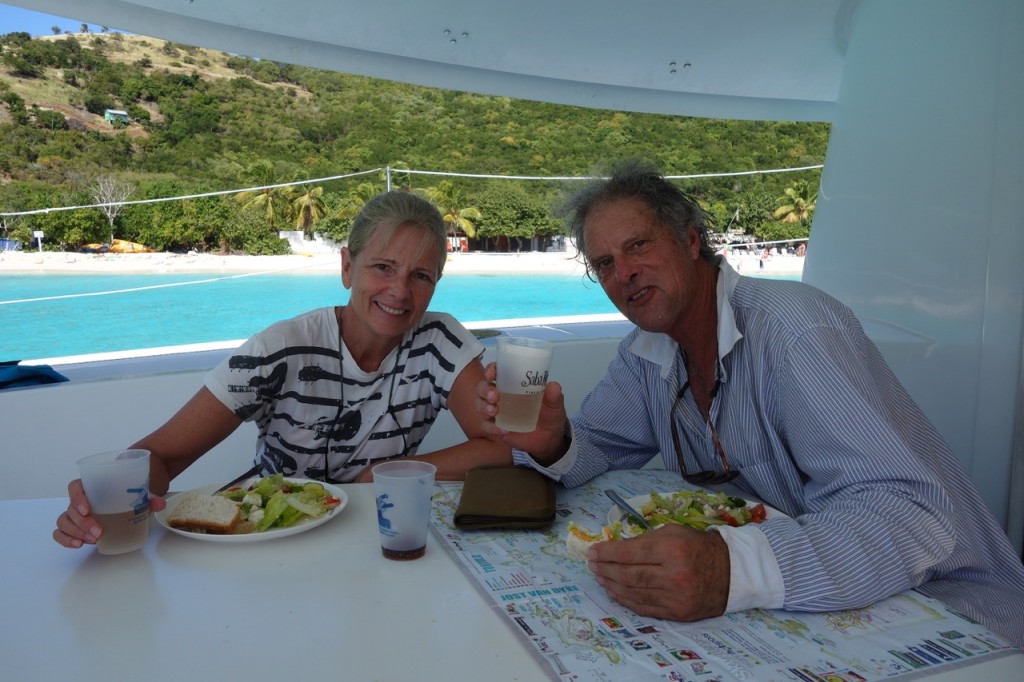 We tacked back and forth thru the marina, on sail alone, in our small motor-less comparatively tiny boat – thru all these mega yachts and mega catamarans, incredible wealth on display – and were able to find our way thru them, as crowded as they were, without hitting anything.

That part was really easier than I expected.

It was the heavy wind and waves and heeling that made me uncomfortable at first. But soon I realized that the waves mean little – it is all a question of wind. I didn’t know that.

And knowing who has the right of way and how to avoid other boats, what you’re supposed to do when 2 vessels come close to each other.

We met situations – and Tim would let us figure out how to get out of them on our own. How to de-tangle a twisted jib, how to recover from a missed tack and an uncontrolled jibe. We did a LOT. When we said good-bye to Tim, we were sweaty and salty and exhausted.

And so now we’re “home”, after negotiating the Tortola traffic, driving on the narrow roads, left- hand side, with the wheel on the American side, with crazies passing us on hairpin turns, up and down mountains, and having to maneuver, only an inch to spare, mirrors pulled in, thru the steep jungle road past another car, just to get to our place. *whew*

Stan is icing down his bruises (they are rather stellar, blue-violet and red-violet, and huge-) and I’m off to a hot shower. Then a glass (probably we’ll finish the bottle) of rose from Provence (a find in the chandlery) and we’ll be in bed by 9, as usual.

Tomorrow we take our sailing exam.

The exam is only required for people who want to charter boats. (We hope to get our International License, which gives us the option to charter in other countries.)

If you BUY a boat – even a huge, 72’ mega-yacht with all the fancy instruments, gadgets and trimmings – there is no licensing requirement to drive the thing. You can get out there and just – GO.

This is a rather scary thought. 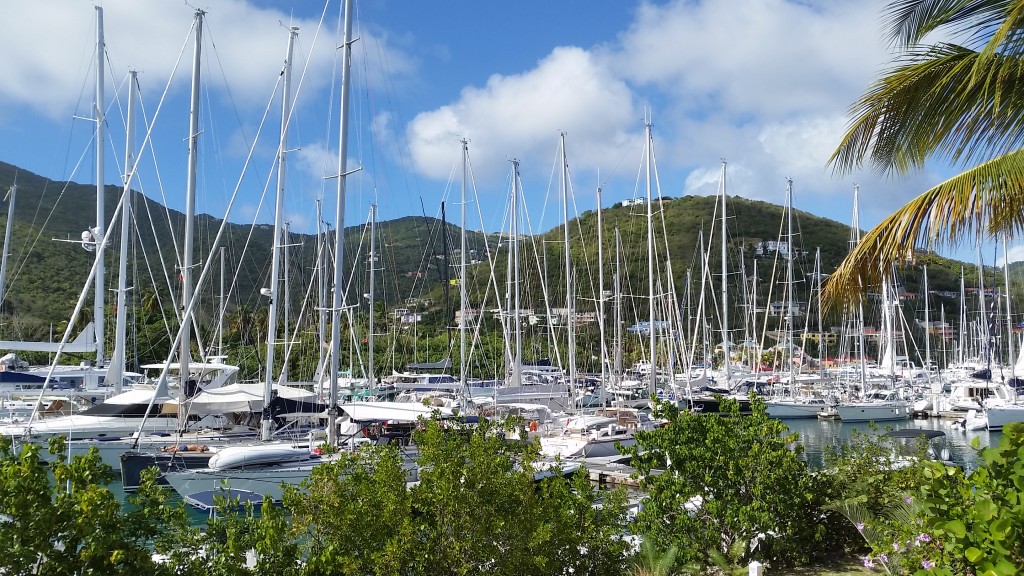 There are a LOT of boats here. Mostly docked in a marina.

What happens is – someone buys a boat, and leases it back to a company as a charter, so they can count it as a business. This helps defray their cost, and they can write their own vacation off as a “business” expense.

So a lot of these boats are charters. Most people come down for just a week or two a year, if that. They bring some of their friends, but they’re not in practice. So they just motor along, and never even put up their sails! They don’t really know how to sail.

So when we sailed – with sail only – into the fuel dock, we got all sorts of cheers from the guys with mega yachts who had used their motors to get in there. They wouldn’t have been able to do what we did.

The world is a funny place.

A note from jlcollinsnh:

The above report came to me as emails from my pal Trish. The photos are also hers.

Close readers of this blog will remember her as one of the two who kidnapped me back in the mid-1970s while I was riding my bicycle around Ireland. She and Wolfgang, her then accomplice and now ex-husband, grabbed me out of my comfortable B&B in Dingle, stuffed me into the back of their VW Bug and hauled me up to Galway. Much pub crawling, music listening and hay-loft sleeping ensued, until they finally kicked me loose to make my own way back to my bicycle.

We have, of course, been friends ever since.

She has lived and worked all over the world, including Iran where they fled the revolution with the clothes on their backs to Germany and on to Liberia where they arrived the day of the revolution there to soldiers with automatic weapons milling about their house.

It was in Africa that she learned to fly and then…

…well then there is simply too much more adventure to recount here.

Fortunately, she has written a book:

It is filled with her stories and gorgeously illustrated with her own rather stunning watercolors. If you read closely, you’ll even find one or two that concern me.

Or you can check out some of her work here.

So, understanding all this, it is no surprise that she and Stan are now learning to sail with an eye on buying and living on a boat that they might very well sail around the world. 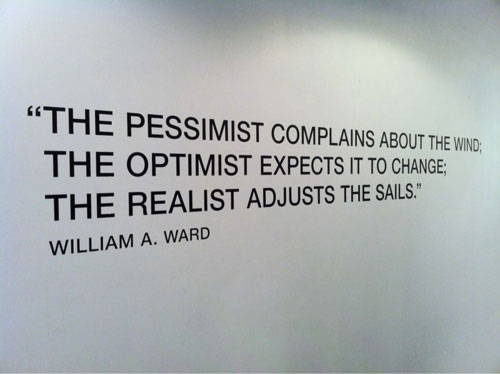